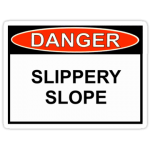 Did addiction politics leave us stranded on a slippery slope?

In 1992, a political skirmish took place in the field of medicine, which has discouraged deeper understanding of human sexuality. According to David E. Smith MD, past president of the American Society of Addiction Medicine (ASAM), doctors bartered away the recognition of sex addiction as a pathology in order to address a more immediate risk. Smith, by the way, founded the free Haight-Ashbury medical clinic in San Francisco during the Summer of Love (1967). He has worked tirelessly ever since both to educate the medical profession about the plastic brain changes behind addiction and recovery and to treat addicted patients. He is the author of numerous books and journal articles.

According to Smith, here’s what happened: Jess Browley and he were the Delegate and Alternate Delegate, respectively, to the American Medical Association’s House of Delegates in search of endorsement of a new specialty: addiction medicine. It became clear that the AMA wouldn’t agree to approve the new specialty unless sex was excluded from the list of possible addictions. So, they tossed ‘sex addiction’ under the bus.

This exclusion was not based on science or Smith’s own clinical experience—both of which suggested that sexual behaviors indeed have the potential to become addictions under some circumstances. This is hardly surprising, as sexual arousal is the most compelling of all natural rewards and it arises in the brain’s reward circuitry (seat of all addiction).

The  reason was strategic. Doctors were bent on snuffing out the tobacco manufacturers’ spin. Big Tobacco was pulling out all the stops to prolong the illusion that “smoking is not addictive.” It claimed that the addiction experts’ evidence should be ignored because, “the experts are saying everything’s addictive.”

Carving sexual behaviors out of the addiction field has had perilous repercussions. Nearly two decades after experts extinguished the Smoke Spin, beginning with the tobacco papers published in the Journal of the American Medical Association (1994), we’re still in the Dark Ages of understanding sexuality.

The ASAM-AMA deal inadvertently shielded sexual addiction from the inquisitive eyes of the very medical researchers who could have shed the most light on sexual excess: neurobiologists. Why study something which, by medical fiat, does not exist? Therefore, there has been almost no direct investigation into the neurobiology of sexual excess. (In contrast, many studies confirm the existence addiction-related brain changes in other behavioral addicts.)

Instead, medical research has focused almost entirely on hyposexuality (lack of sexual responsiveness). Accordingly, we have sexual enhancement drugs and medically-prescribed vibrators and erotica. Doctors are even testing orgasm-producing implants for women’s spines.

Therapists who courageously point out that hypersexuality can lead to addiction, and attempt to treat clients accordingly, are either dismissed or shamed by their more dogmatic peers. In keeping with this mindset, the authors of the upcoming DSM-5 intend to banish the section on hypersexuality to the appendix.

Such tunnel vision is due, in part, to the historic pact discussed above. A generation of textbooks claims that (1) sexual repression is the prime threat to healthy sexuality, and (2) sexual behaviors cannot cause addiction. Academic training has not yet caught up with the radical changes of highspeed Internet and brain research on behavioral addicts.

Meanwhile, scientific research on other behavioral addictions has marched on unhindered by the compromise that helped hog-tie tobacco lobbyists. Brain scans of the obese, as well as scans of gambling and video-gaming addicts, reveal genuine addiction-related brain changes.

Meanwhile, what happens if a patient can’t stop self-destructive sexual behaviors, and seeks professional help? In many cases, the patient is presumed to suffer from some illness other than a sexual addiction. That’s right. The healthcare practitioner selects a different primary, or causal, illness—and refers him for counseling, psychotropic drugs, or both.

The assumption that sexual-behavior addiction is strictly a symptom of some other primary illness produces misleading diagnoses for those wrestling with addiction-related brain changes. These include performance anxiety, ADHD, OCD, depression, severe social anxiety, erectile dysfunction, performance anxiety (with one’s hand?), and so forth. Worse yet, the addicted patient is not informed that he may be able to reverse his symptoms by enduring withdrawal and changing behavior. Brain plasticity works both ways.

Researchers know from other behavioral addictions that the symptoms on which such other diagnoses rest can often be a function of addiction itself (anhedonia, concentration problems, severe anxiety, etc.). Seizing upon another diagnosis instead of educating the client/patient about addiction is the equivalent telling a patient with a broken leg to take pain pills instead of prescribing immobilization of the leg and use of crutches.

Of course, some patients do actually have these other illnesses and conditions in lieu of, or in addition to, self-destructive sexual behavior. But if they do not, and sexual addiction itself is the prime cause of their woes, the doctor often ignores that fact. S/he has been trained not to consider sexual-behavior addiction as a possible primary illness.

Alas, the assumption that other addictions can be primary, but sexual-behavior addiction cannot, is a biological impossibility. Only by excluding sex from the field of addiction research for decades could we fool ourselves into believing otherwise.

A new era for human sexuality

In August of this year (2011) a mighty sea-change began. The omission of sexual behavior as a possible addiction was corrected—not by the AMA, but by ASAM. In the FAQs relating to its recent public announcement, ASAM explains that,

We all have the brain reward circuitry that makes food and sex rewarding. In fact, this is a survival mechanism. In a healthy brain, these rewards have feedback mechanisms for satiety or ‘enough.’ In someone with addiction, the circuitry becomes dysfunctional such that the message to the individual becomes ‘more’, which leads to the pathological pursuit of rewards and/or relief through the use of substances and behaviors.

ASAM’s statement is a great leap forward, but there’s a lot of catching up to do. Thanks to decades of blinders, researchers still have little idea what the brain chemistry of sexual balance looks like, or why it promotes wellbeing. The meme that excess is both normal and risk-free lingers, despite warning signs for men, women and adolescents.

Signs that the brain is developing addiction-related changes could soon be common knowledge, but as scientists study sex’s effects on the brain with more open minds, other interesting insights into human sexuality may come to light. For example, are changes associated with excess, even in milder forms, impairing our ability to enjoy long-term intimate relationships by speeding habituation between partners? What is the effect of regular attachment cues on partners’ brains?

Neuroscience research could conceivably shed a lot more light on questions like these—now that the study of physiology of sexual excess is back in play.

The emperor isn’t wearing his thong

A great percentage of youths in the population suffer from the adverse effects of Internet addiction. It is necessary for psychiatrists and psychologists to be aware of the mental problems caused by Internet addiction [such as OCD, anxiety, and depression].

Physiologically speaking, abnormal has nothing to do with the desirability or undesirability of a given behavior. It is strictly a function of brain/body imbalance. Some people can engage in lots of sexual (or other) stimulation with no harmful brain changes. Others cannot, and such behavior causes symptoms they find unsettling or intolerable. It’s really that simple.

It’s not what we do in the bedroom, in front of our computers, or in the bathhouse that matters. It’s how it affects our plastic brains. If someone’s brain happens to adapt quickly to intense stimulation, such that she needs more and more stimulation, or she shows other addiction-related symptoms, then the problem behavior is excessive for her. She has choices to make. This is no different from a man who doesn’t metabolize carbohydrates well. He must learn the effects of different diets on health.

Never has humanity been better poised to understand its capacity for sexual balance and excess. The sexual-freedom genii has escaped the bottle for good. We can take a hard look at the effects of hypersexuality on the brain without fear of prudish reprisals. Let’s banish prior assumptions, sexual politics and slogans from sex research, and use all the new tools at our disposal to reveal a more complete understanding of human sexuality—its glories and its weak points.

Greater knowledge will empower those of us who love sex to steer for the results we choose while respecting our individual limitations. The alternative of continuing to underplay the peril of sexual-behavior addiction leaves us at risk for drowning in a sea of pharmaceuticals prescribed for secondary symptoms—while the primary cause of woe worsens, unacknowledged.